Images from the Philippines: Zamboanga, Mindanao

In September of last year, fighting broke out in Zamboanga, Mindanao, between the Philippine military and a faction of the Moro National Liberation Front (MNLF) for almost three weeks that lead to civilian injury, death and displacement as grenades and gunfire did not discriminate and rained down on all. The violent standoff forced more than a hundred thousand people and their families to flee and evacuate their villages and homes. Four months later after this man-made disaster, the area struggles to bounce back economically and there are still tens of thousands of people at the evacuation and relocation centers as many of their homes were burned down during the firefight — some say deliberately, because the Philippine military/US want to use the land of their villages to build a military base. The lives and livelihoods of many of the Moro/Muslim people there have been wiped out and destroyed and under the weight of homelessness, extreme poverty, and armed oppression, the unstable situation there has lead to the continued death of children from disease or accidents and has put women at risk for domestic violence, rape, and prostitution. Ninotchka and Jollene went to these evacuation centers and met with some of the women who have chosen to organize in response to what they face day-to-day.

These images were taken in Zamboanga, Minadanao. Photos and captions provided by Ninotchka Rosca and Jollene Levid.

To support phase 2 of the project, you can contribute at: Beyond ‘Red Cross’ – Transnational Post Disaster Sexual Violence Prevention

To help AF3IRM continue our work, you can also donate at http://www.af3irm.org/donate. 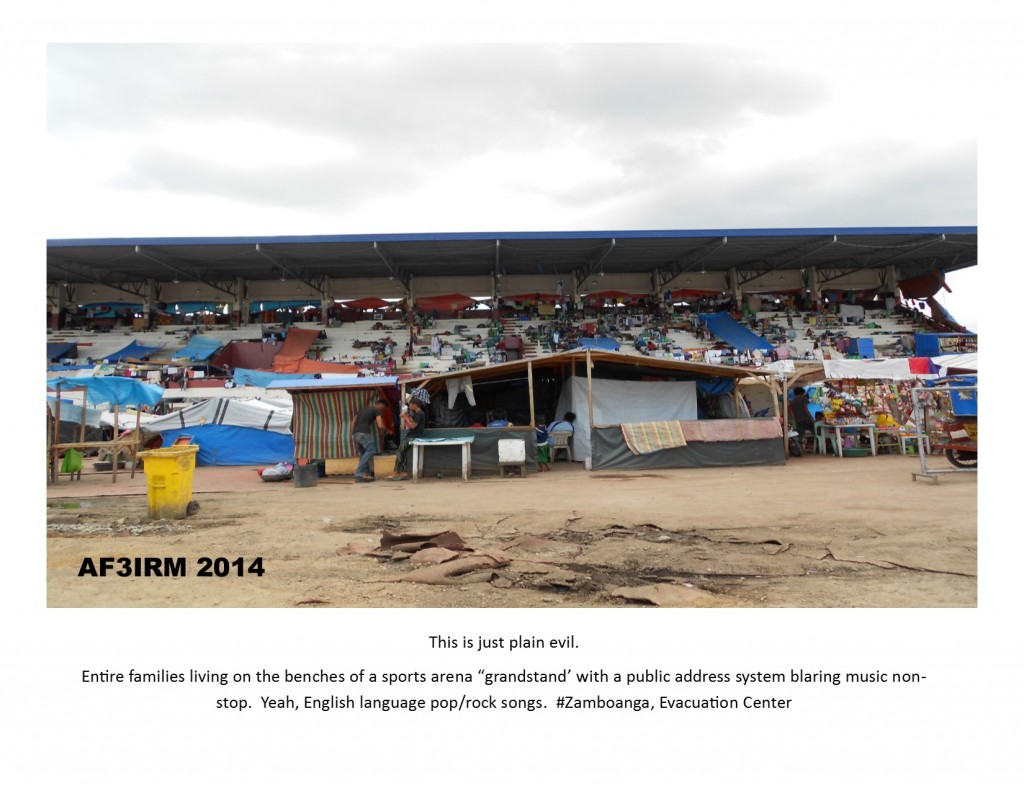 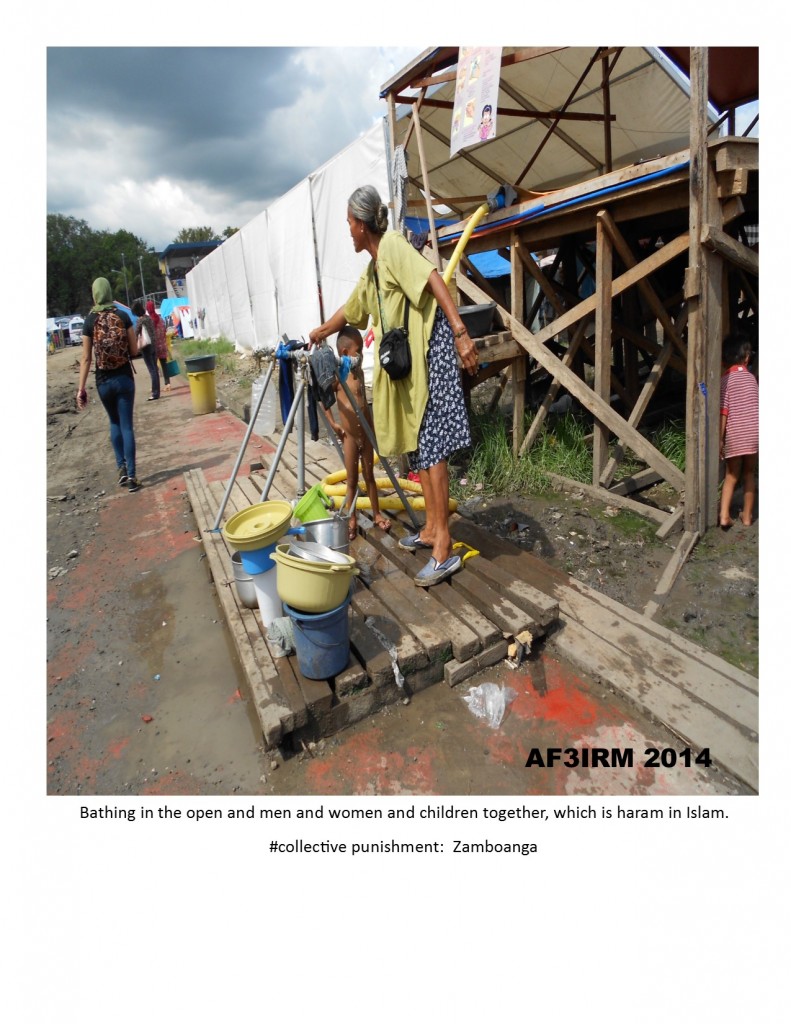 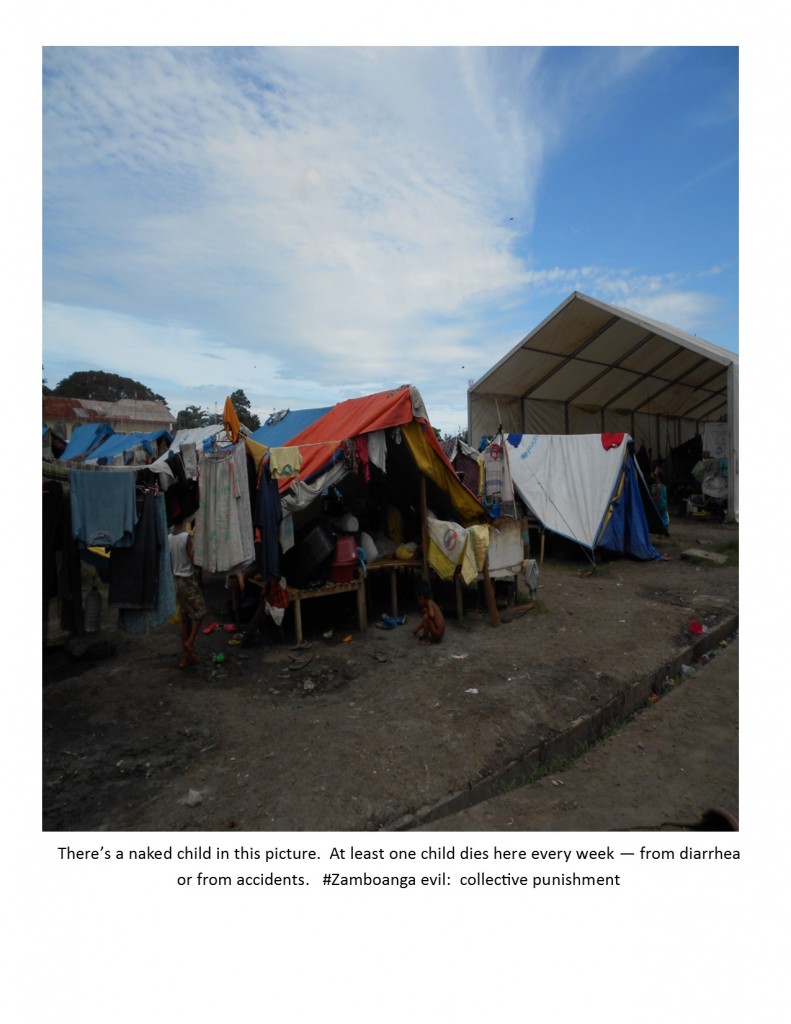 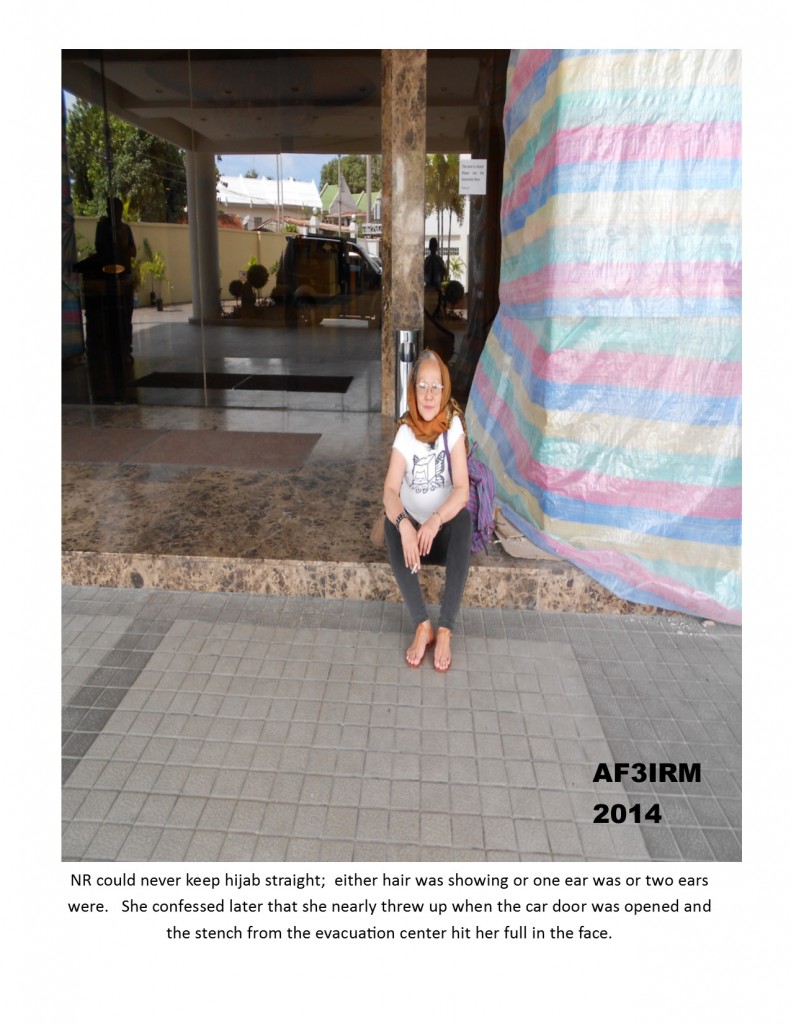 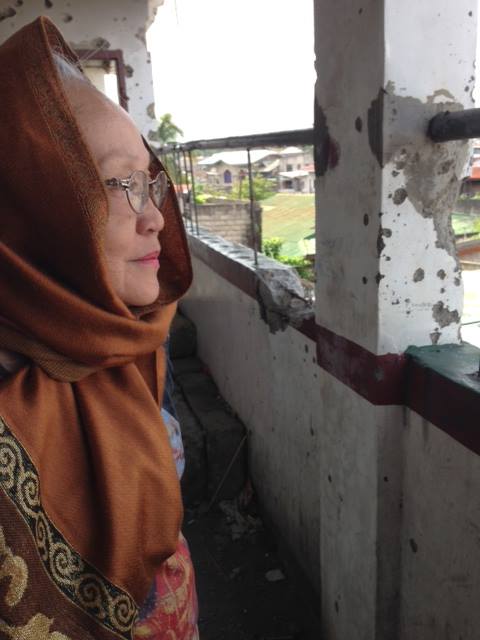 Wind on one’s face; bullet holes on the wall; on the decimated third floor of a house in Rio Hondo.#Zamboanga Photo by Jollene Levid. 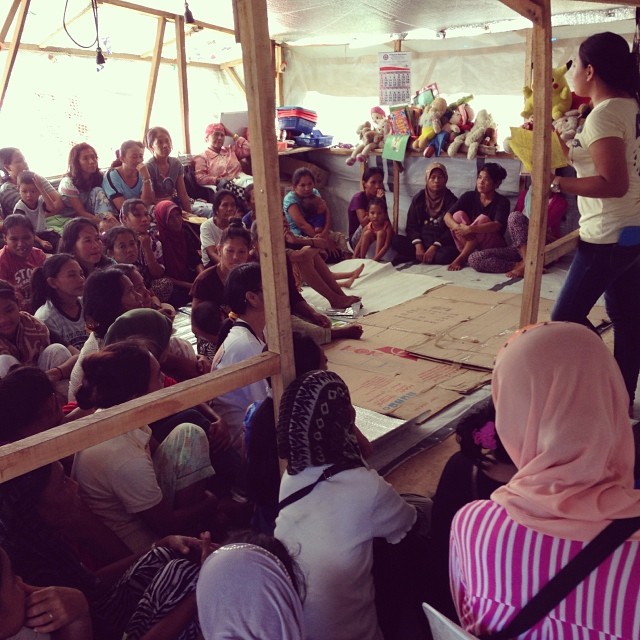 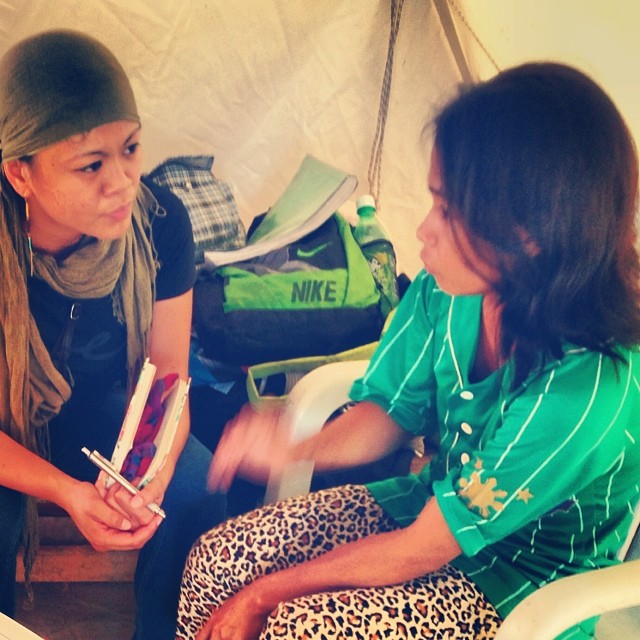 Went to grandstand evacuation center in Zamboanga, Mindanao today. There are over 24,140 refugees living in the track field turned evac center. The poverty doubly impacts women. Domestic violence, rape, prostitution is high. I did this one on one (therapy/interview) with Rufaida, who lives in a tent with her 6 kids and husband who beats her. I told her I was a survivor and she shared her story with me. She showed me her bruises from last night where he beat her with his fists. This is the reality of women here. Poverty & desperation aggravates violence. They say the answer is to organize. Photo by local social worker. #transnationalfeminism #justicenotcharity #mindanao #af3irm #philippines2014 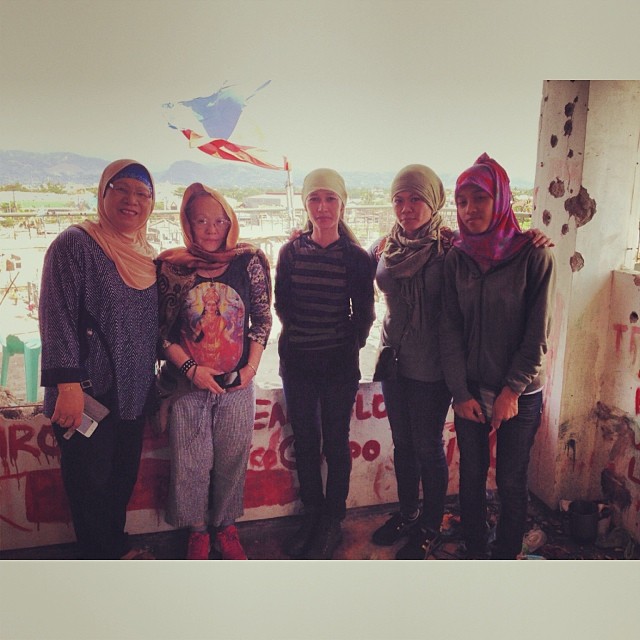 Ground zero – entered the rebels’ former command post with brave Moro women Jing, Zaynab & Aisha. Posed as social workers to gain access. Many perished there. The place was bullet-ridden & torched. The flag behind us was raised by the military after the rebel post fell. The military still suspects rebels in the area. I was more nervous about the armed Philippine military soldiers watching/following us. #zamboanga#justicenotcharity#philippines#transnationalfeminism 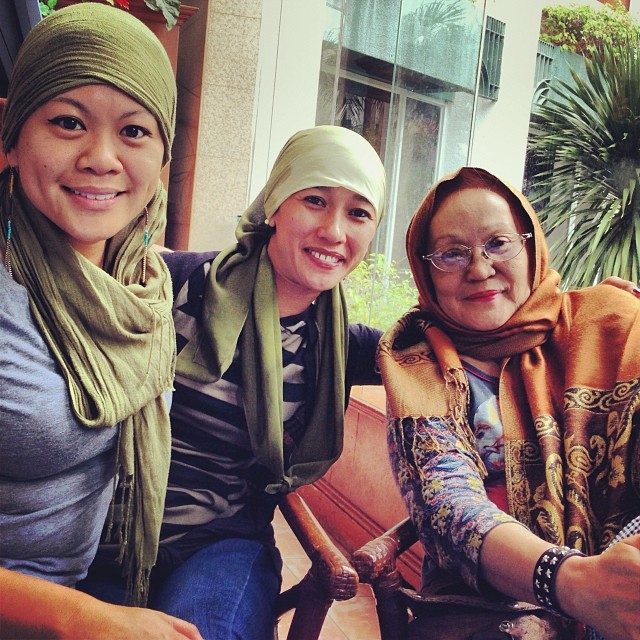 With the boss lady Zaynab. Learning so much from this amazing organizer. #justicenotcharity#beyondrelief #mindanao #transnationalfeminism I have been posting about destruction the whole trip – so here’s some beauty. On the way back from our work yesterday we stopped at a Yakan village where the women still practice their art of weaving. It is still passed on thru the women, who are highly-skilled. An intricate piece can take up to 6 weeks, a square can take up to 3 days. One weaver told me that their tribal pattern was memorized and the women thread it via their grandmothers’ memory. The women’s craft helps the community survive economically and culturally.#respect #yakan #women #weavers #beauty#mindanao 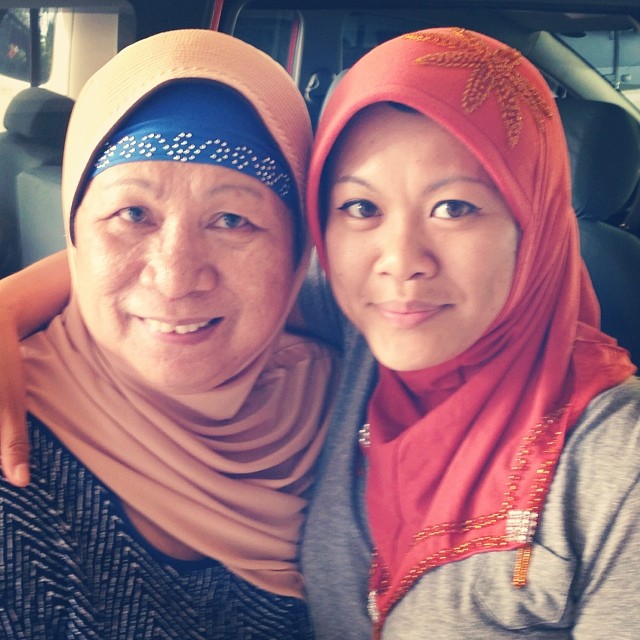 My social work shero Jing Abdulkarim – a first responder when the conflict began. She worked tirelessly, even finding her family members in the evacuation center before hearing news of their displacement. She brought us into the evac and relocation centers so that we can engage in transnational work. “These are my people. They will kill us off if I do not do this work” – Jing Abdulkarim#shero #transnationalfeminism #justicenotcharity#beyondrelief #zamboanga #mindanao #philippines#af3irm