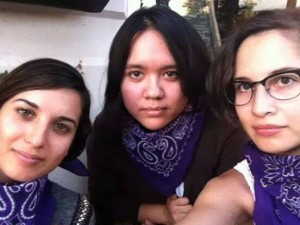 Each day I will list one reason why I am marching on 3/8 with my AF3IRM sisters in LA.

#1- I WILL MARCH on 3/8 FOR MY MOTHER– because my mother makes less than $16,000 a year and when she was my age she made double that salary (which is still outrageous). My mother raised me alone, the courts did not send her a dime of the child support she was promised, and ever since she had decided to leave a husband who emotionally/mentally abused and controlled her she has been at-risk for homelessness (we lived in a motel for almost a year), poor health (no medical insurance), and depression. She has been laid off numerous times because of budget cuts, corporate downsizing, and has been stripped of unemployment benefits. She has lost many friends and a sense of community because she has to find a new job almost every year. Her county job is temporary and renewable every 6 months which is fucking shit for those who know what these kinds of jobs are like. She has an older model vehicle which is going through many mechanical problems and as a woman she is charged ungodly amounts of money to fix the tiniest thing. Her wages barely cover her rent much less this car. The weight of economic and social upheaval/chaos/instability has taken a toll on this mother, MY mother–and this is why I WILL MARCH.

Each day I will list one reason why I am marching on 3/8 with my AF3IRM sisters in LA. Today I name two.

As queer women of color, there is no end to the violence we see done to us within our family and the outside world. Constant— is our fear. Verbal, sexual, physical is the abuse suffered daily. My cousin, my best childhood friend, my sister is missing from my life. Months ago, she had asked for my help, but I could do little. My guilt is tremendous when I see her suffering from addictions and heartaches I can’t describe here.

Today I am outside of my own closet, but tomorrow–trust me–I will deny all of this…When I was only a young child, I thought my family members were gods to my eyes and I begged this fearful cousin of mine that she had to be true to herself and we would all support her with all the love she needed.

There is no shame in being queer.

The next time we were together, lashes and bruises were all over her body and tears that you would not wish to hear from your worst enemy–I heard and I saw. It’s excruciating painful to know/think that perhaps she is lucky she did not die that day. QWOC are not safe and until they are…. I WILL MARCH.

PLEASE MARCH WITH ME.