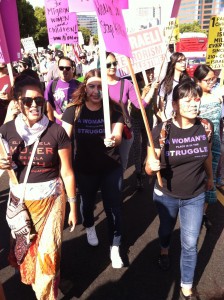 WHY I MARCH: Because AF3IRM awakened my feminist political identity at the age of 19 that I knew I had, but didn’t ever feel safe to express. These group of women have given me tools and language to name violence I had faced in high school–violence that is often normalized as young women navigate the realities of living in a society that sexualizes, commodifies and objectifies them to the point where our consent is obsolete. I march because I understand my story is so intertwined with the story of so many other transnational women/of color fleeing violence in all its forms. I march for my mother, my tias, sisters, cousins, and especially my nieces who are entering a world so intent on bringing our baby girls down. I march because I want to see and experience a more just world. I march because I don’t fucking see another way.

Oh, and I also march because bullshit like this:

“DEAR PARTICIPANTS – we in AF3IRM were notified that a man affiliated with the Revolutionary Communist Party (RevCom) is publicly announcing the March 8th rally as if it was “theirs.” I want to reiterate that this march is convened, ORGANIZED, and led by grassroots organizations – AF3IRM and the Ovarian Psyco-Cycles, with over 56 endorsing organizations, with transnational, women of color at the forefront. We denounce the erasure of women’s theory-building and labor. These actions are disrespectful, but more than that, they reflect the patriarchal practice of rewriting history and excluding women as makers of it. We are no strangers to this type of injustice. We in AF3IRM convened this action to combat this very colonial/imperialist/racist/sexist/homophobic practice. And we REFUSE to be made invisible, even and especially within our own progressive movements. This isn’t about ownership, this isn’t about credit; this is about truly valuing women of color’s leadership and labor. This is a political attack on women and we invite dialogue, but refuse to be derailed at such a critical juncture of our organizing or stand down when it is our own work being devalued and co-opted

This post may be shared and I hope it reaches whomever is falsely owning women’s work. See everyone on March 8th.

Myra Duran is a member of AF3IRM Los Angeles.