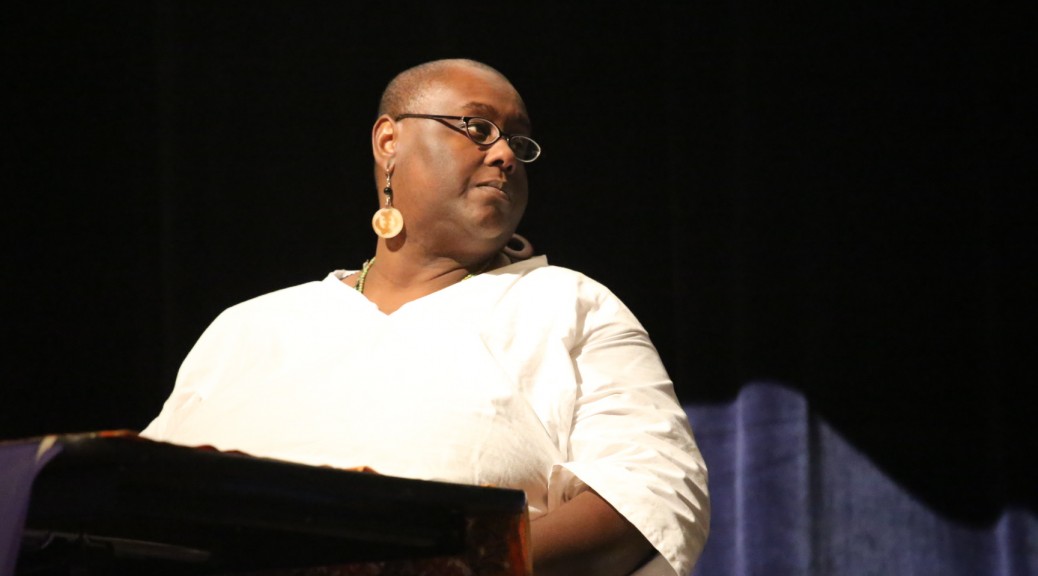 Speech by Thandisizwe Chimurenga, shared at AF3IRM’s Women on the Wave and 25th Anniversary National Summit on October 11, 2014 in Los Angeles.

It is an honor to be here today at AF3IRM’s national summit, and I would like to thank my sisters Jollene Levid and the women of AF3IRM-LA for extending the invitation to speak to you all.

When we examine the question of “What is the importance of women’s theory-building today, in this political climate?”, we should do, at minimum, two things – one look at our particular social location. And secondly, the ground we have already covered.

What is our social location? Where are we? Women, all women, are on the bottom and when u are on the bottom you have a better view; Our location tells us who is left out, and who is here with us. As the beneficiaries of sexual, racial, national and economic exploitation, as we stand in the intersection that Kimberle Crenshaw describes, gettin’ hit by it all, we are the best equipped to determine what it is we need in order to get out of harm’s way, how to heal from harm’s way, and how to keep others from taking our places in the intersection.

Andrea Smith, co-founder of Incite women of color against violence, argues that women of color’s shared victimization by white supremacy does not necessarily mean we have been impacted in the same way by white supremacy; and consequently, strategies for survival under white supremacy, let alone liberation, for one community may in actuality be oppressive to another community. Many Black and Brown youths, male and female, look to the US military as a means of economic advancement to escape from poverty, which is understandable, but is hardly liberating or an act of solidarity for Pilipinos, or Afghanis, or Iraqis, or Syrians, or any other people where US imperialism currently has its fangs or has its bloodthirsty eyes set on.

And those countries where US imperialism has wrought economic havoc on the inhabitants [such as Nicaragua and El Salvador], citizens of those countries oftentimes find a measure of economic relief by moving to the US and obtaining citizenship. Again that is understandable – that is out of economic necessity and not a true choice, but it is also complicitous in the theft and conquest of this land from its original landowners. Not to mention the fact that many attempts to craft narratives that show the “worthiness” of this or that immigrant population for citizenship are sometimes predicated on the erasure of the descendants of those Afrikans who absolutely did not have a choice to come here, who simultaneously were the wealth and created the wealth that built this country; the black bodies upon which white supremacy currently satisfies is monstrous appetite on.

Such examples represent a bump in the road; not necessarily a mountain, but something to be maneuvered around nonetheless. How do we do that? Well, what ground have we covered already?

The best tradition of Black feminism has always been anti-imperialist and in solidarity with the exploited the world over. Claudia Jones told us that when she railed against capitalism and war in Korea as she was being sentenced to prison for being a communist in the 1950s.

The best tradition of the politics of Black feminism, both articulated and not, have been not just progressive but absolutely revolutionary, understanding that social change divorced from economic change still leads to exploitation. Frances Beale and the sisters of the Third World Womens’ Alliance told us that in 1969 when they declared that Black women face a triple jeopardy, as women, as workers and as members of the Black nation. Our sisters in the Combahee River Collective reiterated that in the mid 70s.

bell hooks’ labeling of “white supremacist heterosexist patriarchal capitalism” – a name as ugly as the system it identifies – and Patricia Hill Collins’ labeling of what we endure as a “matrix of dominations,” laid it out for us again. They reminded us. Again.

Going back over the ground that we have already covered, we go back to Claudia Jones, who said Black women are super exploited. Our roles as mothers, as caretakers and fighters for our families, as crucial, sometimes, sole earners in our families, we possess the greatest potential for militancy, for revolutionary consciousness, for organizing. We are the caretakers, the fighters for our families. A crucial component we bring to the table [along with fighting] is that of nurturing and that is sorely missing from our movements today in the form of healing.

We are under assault daily, every few minutes. We are consistently being traumatized and we need to address this trauma. We have to be more intentional in our organizing work, recognizing the concept of healing as an integral piece of organizing – healing is needed in our personal lives, in our communities, in our movements for liberation and must be incorporated into our organizing work.

This includes grieving. We need the space to grieve – to give voice to that aching, understanding that it is not a weakness in the way that patriarchy dismisses anything that is not hypermasculine. Understanding that, as one of my elders taught me, “sometimes you can see farther thru a tear than you can through a telescope.”

This brings me to my second premise, that of Why is it important to have transnational, women of color take leadership in ideology-building within our movements?

Our work is creating the new society, the new nation, both here, in the belly of the beast, and in those spaces and places we come from originally. We seek to free those spaces from imperialist, foreign domination, and so it is important that our work mirror our end goal as closely as possible, if we say that we are against all forms of oppression, if we are for the freedom of humans to develop and live their lives, then we must mirror that. We have to see it being done. Transnational, women of color must take leadership, not wait for it to be offered or divided up in a will at death. Take it. Now.

We must set the tone, we must define the work, we must put the work into practice, we must make sure the work stays on point. And we need male allies in this. We always need male allies. But we can’t wait on them. I remember a book written on the Civil Rights Movement called “Men Lead, Women Organize.” We know this. That’s not necessarily essentialist, history bares it out. Of course it could change, but it ain’t thus far …

These are some of my thoughts. Thank you for allowing me to share them with you. 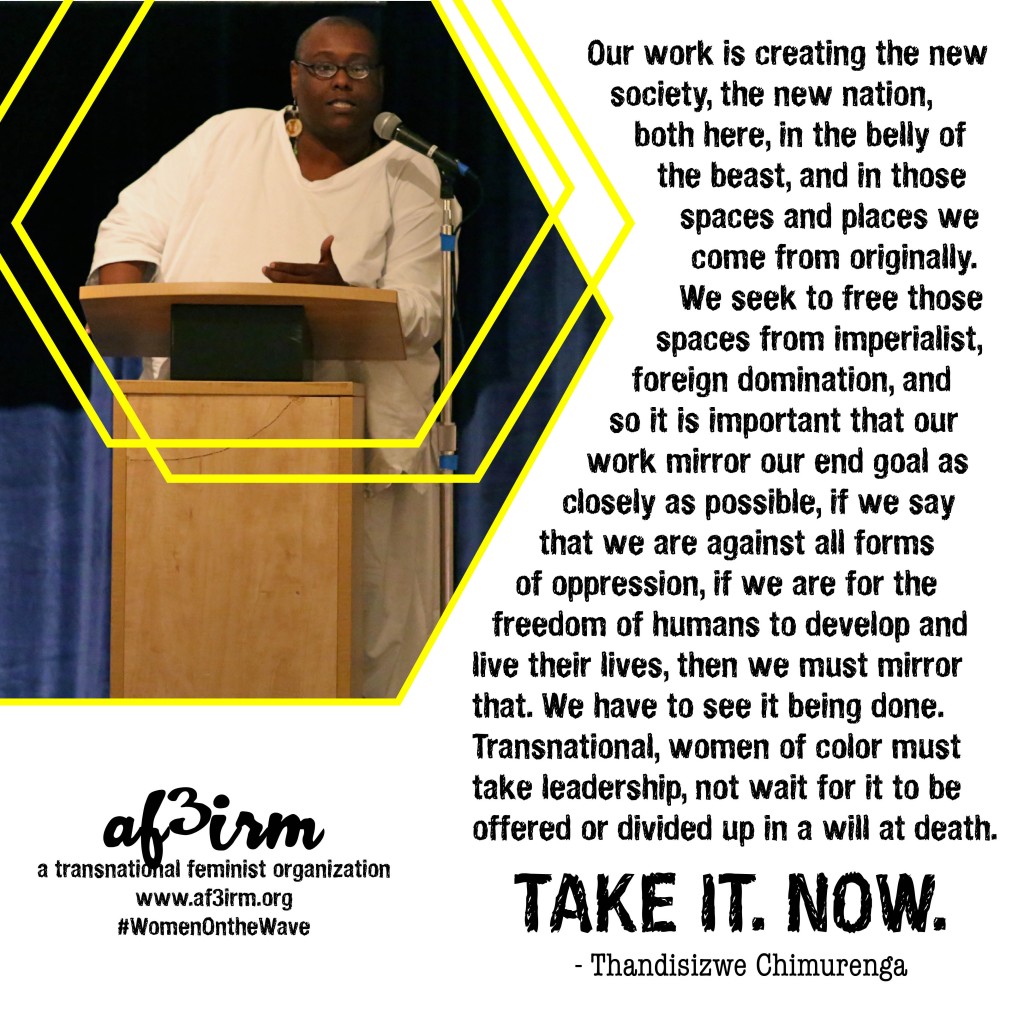