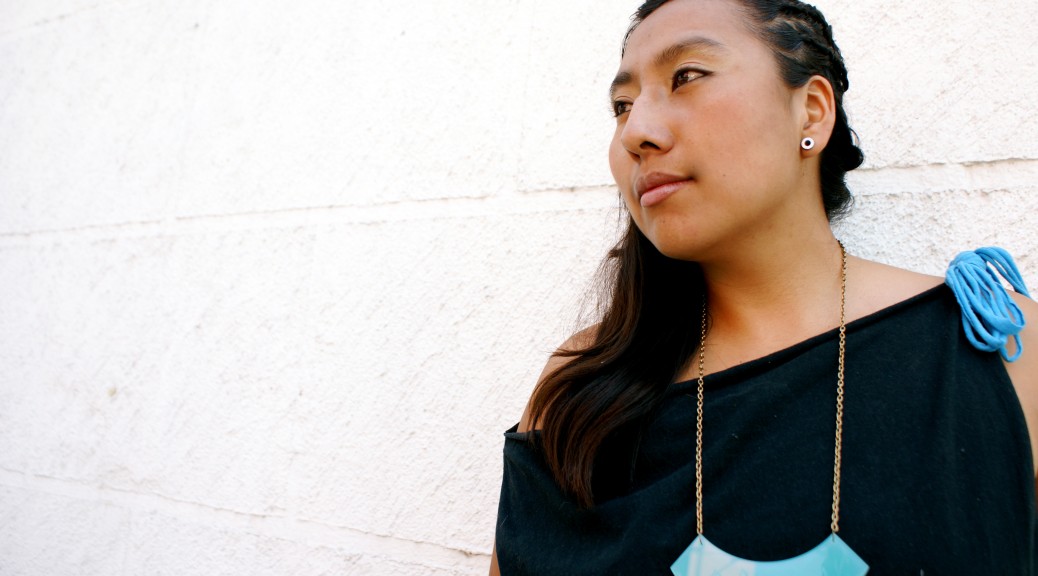 NATIONAL– The intersections of women’s art with political resistance take the stage at the upcoming AF3IRM National Summit “Women on the Wave.” Several award-winning and celebrated artists from all over the world will present and perform throughout the two days, emblematic of the transnational connections at the heart of AF3IRM’s feminist practice. As previously announced, Chilean emcee Ana Tijoux will present at the summit, fresh off her appearance at TEDGlobal 2014 in Rio de Janeiro, Brazil. Tijoux’s powerful songs, including “Somos Sur” with Palestinian rap artist Shadia Mansour, weave together the political and the personal. She will bless the summit with her energy and fire as she discusses her work, music, and feminism during a keynote session.

AF3IRM is also proud to announce that Mare Advertencia Lirika will perform. A Zapotec woman and rapper born in Oaxaca, Mexico, Mare uses her art to “eradicate gender inequalities within society” and her work has connected her with social movements within Mexico and all around the world. Her musical talent and her commitment to social justice has led to her being featured in a documentary titled, “When A Woman Moves,” and she was selected by NPR as the “Best Latin Alternative Music of the Year” in 2012. Last year, Mare was recognized as “María Sabina” for her work on behalf of championing women rights. She has shared the stage with musical acts like Guerrilla Queenz, Golden Ganga, and Cihuatll Ce. Summit participants will be able to attend her special lunchtime performance.

At the end of first day’s activities, summit attendees, as well as the general public, are invited to attend an evening celebrating women’s creativity, existence, and resistance. The “Women on the Wave” Solidarity Night will feature an art exhibit and performances, headlined by Australian-born musician and hip hop artist Maya Jupiter. A long-time supporter of AF3IRM, she has performed her inspiring hits “I Am” and “Phenomenal” at its annual International Woman’s Day shows. Maya Jupiter was recently chosen for Peace Over Violence’s Voice Over Violence Humanitarian Award, along with her partner Aloe Blacc, for their contributions to the fight against sexual violence. She is also co-founder of Artivist Entertainment, which supports art and music that inspires positive social change, with Quetzal Flores, Veronica Gonzales, Alberto Lopez and Aloe Blacc.

Joining Maya Jupiter for the night’s the line-up is emcee Asa Lianess, member of the all-female hip hop soul crew called EARTHSTONEZ and founder of Henna for a Cause. Poets Faith Santilla, Irene Suico-Soriano, and Annette Garcia will also be gracing us with their words and insight. Artwork will be displayed at the event and Alfie Numeric will be on hand producing live art throughout the evening.  “Women on the Wave” Solidarity Night will take place at the SEIU 721 Local Auditorium (1545 Wilshire Blvd, Los Angeles, CA 90017).

During the two-day Summit, a visual exhibit of AF3IRM’s 25 year history will be on view. There will also be opportunities for participants to engage in their own forms of cultural resistance, following in the tradition of revolutionary feminist art. The “Women on the Wave” Summit and Solidarity Night will be truly inspiring experiences, as AF3IRM not only looks back on how far women have come, but also envisions how far women will go. As bell hooks said, “[…] the function of art is to do more than tell it like it is-it’s to imagine what is possible.” 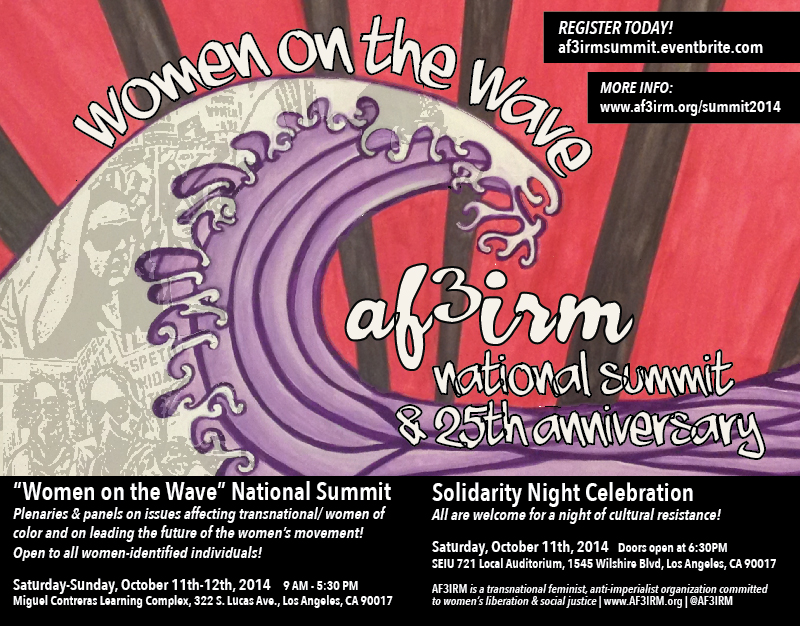 AF3IRM’s 25th Anniversary and National Summit: “Women on the Wave” takes place October 11-12th, 2014 in Los Angeles at the Social Justice Academy at the Miguel Contreras Learning Complex. The summit celebrates AF3IRM and its history of over 25 years of women’s organizing, including their current work as a transnational feminist women’s organization and former work as a women’s solidarity organization. AF3IRM welcomes all women-identified individuals to join in the dialogue, celebration, and resistance. The event is wheelchair-accessible and childcare can be provided. Space is limited! All freedom- and justice- loving people are also welcome to attend Solidarity Night on October 11th at SEIU Local 721.