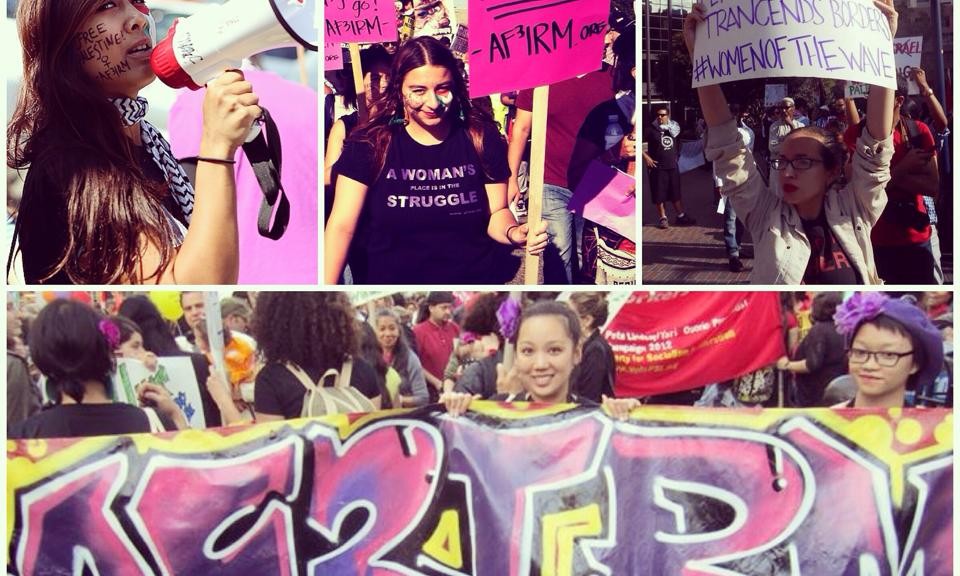 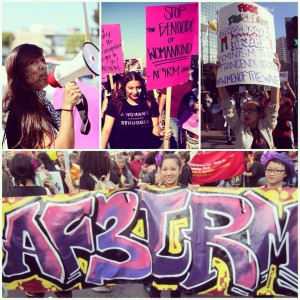 NATIONAL — This weekend AF3IRM’s “Women on the Wave” National Summit brings transnational feminism to an estimated audience of three hundred women at Miguel Contreras Learning Complex in Los Angeles. The two-day historic gathering boasts an impressive line-up with Ana Tijoux, Rosa Clemente, Ninotchka Rosca, Thandisizwe Chimurenga, Grace Chang, young women leaders representing different communities, and performances by emcees Mare Advertencia Lirika and Sista Eyerie. As AF3IRM celebrates its 25th anniversary, the gathering also brings home the work and passions of AF3IRM as an organization and on the individual level. The first day of the “Women on the Wave” ends with a special plenary featuring some of the diverse members of AF3IRM as they share how they are fueled by the work they do in AF3IRM and how they bring transnational feminist theory to life in their personal and political work.

Each of the featured speakers for “AF3IRM’s Activism in Action: Insight into the Practical Application of Ideology in Praxis” panel brings a different background and perspective to AF3IRM.  Olivia Canlas is the coordinator of the New York chapter and has been with AF3IRM since she joined the Chicago chapter of GABNet. Her interest in creating women-identified led spaces and working to raise consciousness around issues affecting women and communities of color has led her to co-curate La Bracera: Women and Work, a multimedia art show presented by AF3IRM New York in 2012 and to serve as a collective member of the Asia Pacific Forum, a weekly radio hour in New York City. Olivia currently works in Foreclosure Prevention in the Far Rockaways, an area that was severely impacted by Hurricane Sandy.

From the Los Angeles chapter of AF3IRM, Myra-Gissel Durán was drawn to GABNet when she interned for the Purple Rose Campaign while attending UCLA, where she earned a degree in Women’s Studies with a concentration in Women of Color Feminism and a minor in Labor and Workplace Studies. She now works as the Policy Coordinator for California Latinas for Reproductive Justice, an organization committed to “honoring the experiences of Latinas to uphold our dignity, our bodies, sexuality, and families.”  Myra advocates for passionate politics where love is at the center of the work and has served on the Young Women’s Leadership Council for the Pro-Choice Public Education Project (PEP) to ensure the inclusion of the interests and voices of young women, transgender & gender non-conforming young people.

Cathy Mendonca is one of the strong leaders from AF3IRM San Diego and she uses AF3IRM’s transnational feminist lens on a variety of issues including awareness of disabilities, domestic violence, labor and sex trafficking, and police and incarceration. Cathy has especially pushed for law enforcement accountability through intersectional education and direct action as co-founder of United Against Police Terror and the establishment of the San Diego chapter of Black and Pink, an organization supporting LGBTQ prisoners impacted by the prison industrial complex. Her work has also included being a Domestic Violence and  Emergency hotline counselor and Sexual Assault Response Team Advocate.

AF3IRM’s National Organizing Director Maureen Ivy Quicho has been a part of several chapters of GABNet/AF3IRM for over ten years. Ivy was also a Co-Founder and the former Executive Director for the Mariposa Center for Change, a transnational feminist non-profit in LA for women and children. She has a background as a youth organizer and is currently active in the labor movement. She served as the first woman of color National Organizing Director for a resident physician union, CIR and now works for SEIU Local 721 organizing public sector nurses at Los Angeles County + USC.

These four strong and brilliant women reflect the diverse areas of activism that AF3IRM supports in its pursuit to dismantle systems of oppression and this plenary will provide personal perspectives on the fight for the liberation of womankind. It also offers an intimate glimpse into the work that AF3IRM does and why its members choose to dedicate themselves to the AF3IRM motto “A Woman’s Place is at the Head of the Struggle!”

These AF3IRM members will join other amazing women-identified activists and theorists at “Women on the Wave.” AF3IRM’s National Summit and 25th Anniversary takes place on October 11-12th, 2014 in Los Angeles at the Miguel Contreras Learning Complex. “Women on the Wave” aims to bring together women from all over North America and beyond to build the next wave of feminism. The summit also celebrates AF3IRM and its history of over 25 years of women’s organizing, including their current work as a transnational feminist women’s organization and former work as a women’s solidarity organization. AF3IRM welcomes all women-identified individuals to join in the dialogue, celebration, and resistance. 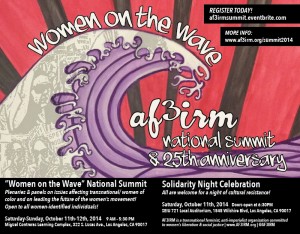